Balance of the ISSF W. C. in Maribor - Medals Standing and the list of all the Medallist 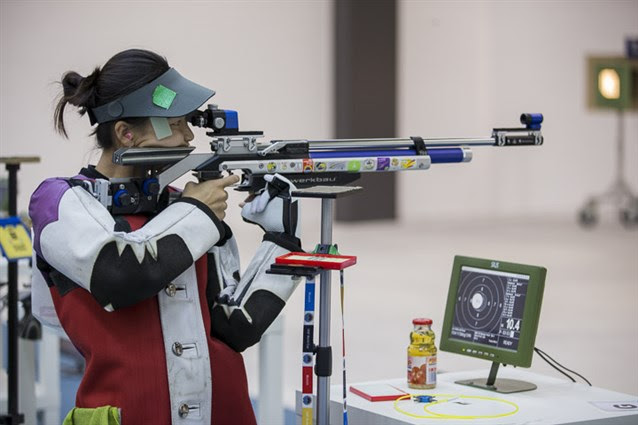 ISSF Rifle and Pistol World Cup in Maribor: the People's Republic of China closes on top

The medals standing after 10 of 10 Events

All the medallists of the 2014 ISSF World Cup in Maribor 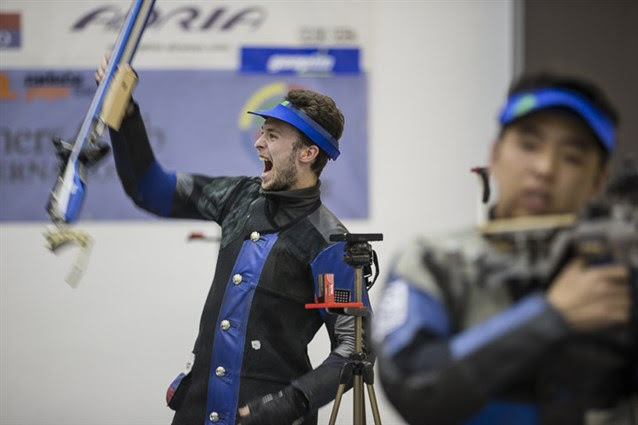 The 26-year old shooter won his very first world cup medal in Maribor, Slovenia, beating the Chinese finalist Cao at the last shot. “My father Igor will be happy: he has been my first coach.”
Sergey Kamenskiy, from the Russian Federation, won the 50m Rifle 3 Positions Men event final, the last match of the 2014 ISSF World Cup in Maribor, Slovenia.
Kamenskiy secured his very first ISSF Gold medal with an overall score of 459.7 points, and 0.2 points of advantage on the Silver medallist, China's Cao Yifei.
The last shot turned the final in favor of the 26-year old Russian shooter. Kamenskiy shot a fair 9.8, while his Chinese opponents marked a disappointing 8.2 placing himself in second.
The 2006 Junior Wold Champion Cao, 26, had led the qualifications, and finished the Kneeling and the Prone series of the final match in the lead. Entering the Standing series with 4.0 points of head-start on his followers, he wasted his advantage throughout his last five shots.
“I have been lucky. Cao made a mistake on his last shot, and I caught him up.” Kamenskiy said, after the final.
“My father will be so happy: he has been my first coach. He showed me how to shoot when I was only 9-year old. This is my first world cup gold medal and it's for him.” The Russian shooter added.
“My hand was shaking today. I was definitely nervous, going into the final. But the more I shot good scores, the more I gained confidence, and finally I made it.”
On his way to the highest step of the podium, Kamenskiy left behind him also the 26-year old German shooter Daniel Brodmeier, who took today's Bronze with 449.0 points.
The German finalist climbed up the scoreboard during the Standing series, overtaking the 2004 Air Rifle Olympic Champion Zhu Qinan of the People's Republic of China, who finished in fourth with 438.4 points. Zhu was followed by his teammate Kang Hongwei, fifth with 428.3 points, and by the London 2012 Olympic Bronze medallist Matthew Emmons, sixth with 415.9 points, today.
The first two shooters who had to leave today's elimination-style final match were Russia's Fedor Vlasov and Norway's Ole Magnus Bakken, who placed seventh and eighth with 405.5 and 399.4 points, respectively.
The 50m Rifle 3 Positions Men final closed the 2014 ISSF World Cup in Rifle and Pistol events in Maribor, Slovenia. The next – and last – ISSF World Cup leg of the year will take place in Beijing, China, starting from July 2. Jitu Rai from India won his third medal in 9 days. 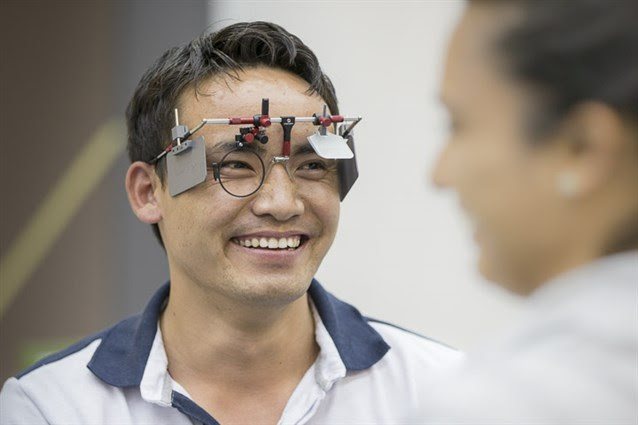 The young Indian talent Jitu Rai finished in the spotlights once again at the ISSF World Cup in Rifle and Pistol events in Maribor, pocketing his third medal in a row.
India's Jitu Rai is on fire. The 26-year old shooter won today's 10m Air Pistol Men event at the ISSF World Cup in Maribor, just two days after winning Silver at the 50m Pistol Men final, and just nine days after claiming a silver medal at the previous world cup stage in Munich on June 11.
Three world cup medals in less than ten days: Rai is currently holding the 26t place in the world ranking, but he's definitely climbing it up fast. Today, he claimed his first international Gold ever with 200.8 points, leaving few chances to Spain's Pablo Carrera, who followed him in second place with 198.7 points, and Russia's Anton Gourianov, third with 177.2 points.

“I have not changed anything in my equipment or in my shooting technique. I am still training hard as always. I don't know what happened!” The Indian champion said, smiling when asked how he managed to finish on the podium three times in a row, while he had never made it to the medals the two seasons before.

Spain's Carrera, on the other hand, had walked into the match as one of the favorites. The 27-year old shooter finished twice on the podium in Munich, winning Gold at the 10m Air Pistol Men event and Bronze at the 50m Pistol Men final.

“My focus is on the world championship and on the Olympic Quota Places that will be assigned there.” Carrera said then. “Every world cup stage this year is part of my preparation for that.” 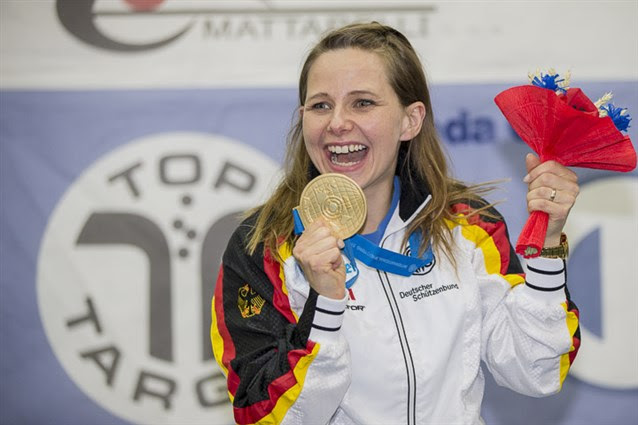 The German finalist beat Mongolia's five-time Olympian Otryad in the 25m Pistol Women Gold medal match to win her very first world cup medal, at the 2014 ISSF World Cup in Rifle and Pistol events in Maribor, Slovenia.
“This is my first world cup medal... I couldn't be more happy!” That was the first comment of today's 25m Pistol Women event winner, Monika Karsch, from Germany.
The 31-year old shooter finished the qualifications in first with 588 points (296 Precision, 292 Rapid Fire), and then led the semi-finals with 21 hits.
“I was a bit nervous going into the semi-final. During the qualifications I shot my best Precision score, and I knew I had to give my best to make it through to the medal matches.” Karsch said.
In the Gold medal match, she met the 2008 Olympic Silver medallist Gundegmaa Otryad, of Mongolia, beating her 7 to 5 point, to secure her first world cup medal ever. The German shooter had finished in the spotlights at the 2013 European Championship, where she ended up on her first international podium winning the Bronze.
“I have been shooting for years, and this is my first world cup medal. It comes in the right moment, right ahead of the world championship.” Karsch said, mentioning the forthcoming 51st ISSF World Championship, that will be held in Granada, Spain, starting from September 7.
Otryad (36) walked out of the match with the Silver medal, secured with 21 hits in the semi-final and 5 points in the medal match. The 5-time Olympian had won the previous world cup stage, in Munich, last week, confirming to be one of the strongest pistol shooters of the world.
Today, she was followed by Antoaneta Boneva, 28, the Bulgarian athlete who won of the Bronze medal match beating Hungary's Renata Tobai Sike by 7 to 5 points after clearing the semi-final with 18 hits. 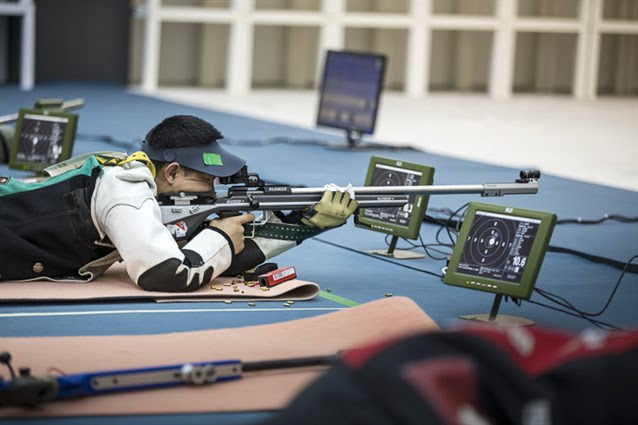 Lan Xing, of the People's Republic of China, won today's 50m Rifle Prone Men final at his first try. The 23-year old shooter from Beijing had indeed never made it to a final match in this event, before.
Shooting since 2005, his best placement in the rifle prone event had been a 28th place, recorded at the last world cup stage in Munich, less than ten days ago.
In spite of the lack of experience, Lan did not hesitate today. He qualified with the eighth score, this morning. But with the new rules the final is a new phase of the competition: the scores are set back to zero, and a new game starts.
Then, Lan gave his best. While the qualifications leader Matthew Emmons (USA) was the first to leave the match placing in eighth with 82.6 points, the Chinese shooter climbed up the scoreboard to the top, gaining tenths shot after shot.
Slowly, but constantly, he nailed a series of great 10s: he shot just once in the ninth ring out of 20 finals shot, and eventually he closed the match in first with an overall score of 209.0 points, meaning an average of almost 10.5 points per shot.
Lan won his first Gold medal in this event with 2.3 points of advantage on Australia's 2008 Olympic Bronze medallist Warren Potent (Silver with 207.7 points). Potent, 52, currently ranked seventh in the world, had won his last ISSF world cup medal back in 2010, on his home turf, in Sydney.
On his way to the second step of the podium, Potent shot-off Switzerland's 42-year old finalist Marcel Buerge, leaving him the Bronze medal (186.4 points), while Odd Arne Brekne of Norway and Henri Junghaenel of Germany finished out of the podium in fifth and sixth place with 165.2 and 144.8 points, respectively. The second German finalist, Daniel Brodmeier closed the match in sixth with 123.8 points, followed by Brazil's Cassio Rippel in seventh with 103.4 points. 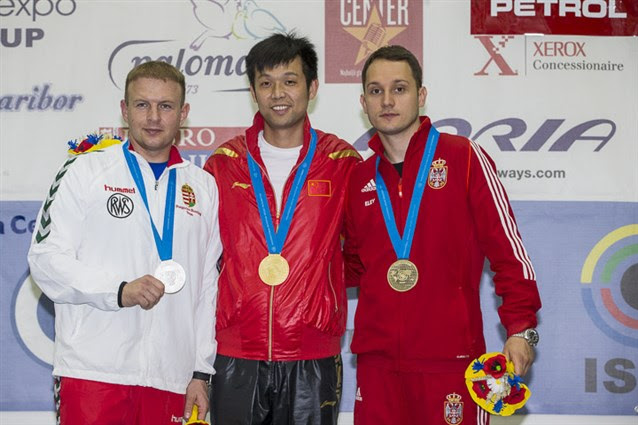 The ISSF World Cup in Rifle and Pistol events in Maribor was opened by today's 10m Air Rifle Men event, won by the 2004 Olympic Champ and 2008 Olympic Silver medallist Zhu Qinan, of the People's Republic of China. Peter Sidi (HUN) and Milutin Stefanovic (SRB) joined him on the podium.
The fourth leg of this year's ISSF World Cup Series kicked off in Maribor, Slovenia, just two days after the closing of the previous world cup stage in Munich, Germany.

600 athletes coming from 59 nations arrived here to compete in the 10 Olympic Shooting Rifle and Pistol events, from June 15 through June 20.

The 2004 Olympic Champion Zhu Qinan, 29, from the People's Republic of China, won the 10m Air Rifle Men final, the first medal match of the event.

The 29-year old Chinese champion secured the brightest medal with 207.6 points, after leading the group since the first shots. With his last two shots (10.7 and 10.0) he beat the reigning World Champion Peter Sidi of Hungary, 31, who placed in second with 206.2 points.

“I have been waiting for Zhu to fire his last shot, before triggering mine. I wanted to know how much I needed to score to reach him.” Sidi said, explaining why he had been waiting for so long before firing his last shot. “That turned out to be an impossible task: I needed to shoot a 10.9 to tie him. And I had not shot one single 10.9 during the whole day. With only 18 seconds left after Zhu's shot, I quickly fired a 9.5, and that was all.”

Sidi, the reigning world champion of the 10m Air Rifle event, is working on the most important match of the season. “I am preparing for the ISSF World Championship in Granada. Like everybody else I guess. But I am walking into the competition as the title holder, and I want to defend it.” He said.

“It won't be easy, with the new rules. I will try my best, and I will be taking part in the next world cup stage in Beijing as part of my preparation: I need to fine-tune my equipment.”

“I have changed my shooting jacket and other details. That costed me a lot of points at the last world cup in Munich, but all should be fine by the time I will compete in the World Championship.”

Today's Bronze medal went to Serbia's 29-year old Milutin Stefanovic, who scored 184.2 points to step on the podium for the second time this year, after pocketing a Silver medal at the first world cup leg of the season in Fort Benning.