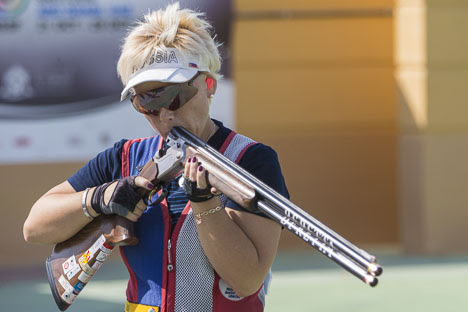 Germany and the Russian Federation tied in first place with one Gold and one Silver medal each, here in Abu Dhabi. Two world records were equaled in Skeet events.
On the 28th  Skeet Men Final won by Spain’s Juan Josè Aramburu concluded the 2013 ISSF World Cup Final in Abu Dhabi, UAE, where the 60 best shotgun shooters of the world - coming from 25 countries - arrived to compete in the five disciplines of Olympic clay shooting.
Germany and Russia finished atop of the medal standings, with One Gold and one Silver medal, each.
Slovakia followed in third placed with one Gold and one Bronze medal, both won in Trap events.
Italy pocketed the highest number of medals (4 awards), but finished in sixth place with no Gold.
Two records were equaled during this competition, both in Skeet events. Olga Panarina (RUS) tied the current world record of 74 hits out of 75 targets in the Skeet Women event, on the 27th of October. While today it was Kuwait’s 50-year old Alrashidi who equaled the world record of 124 hits out of 125 targets during the Skeet Men qualifications.
Marco Dalla Dea The German shooter had won the ISSF Shotgun World Championship just five weeks ago. She arrived here in Abu Dhabi as one of the favorites, and she made her way to the highest step of the podium with 72 hits in the qualifications, 15 hits in the semi-final and 15 hits in the Gold medal match.
Christine Wenzel won again. The reigning World Champion secured today the Skeet Women world cup title at the 2013 ISSF Shotgun World Cup Final in Abu Dhabi, UAE, strengthening her leadership atop of the world ranking, one month after winning the ISSF Shotgun World Championship in Lima, Peru.
The 32-year old German shooter beat Russia's Olga Panarina in the Gold medal match by 15 to 13 hits, pocketing her second World Cup Final title four years after her victory at the 2009 World Cup Final in Beijing.
Wenzel qualified for the Semi-Final with 72 hits in the qualifications, and then cleared the round with 15 hits, tied to Panarina and to Thailand's Sutiya Jiewchaloemmit. The three athletes passed through a shoot-off, won by Wenzel and Panarina, who advanced to the Gold medal match. There, Panarina missed two targets on the third station and then again one on the fifth, giving Wenzel the opportunity to win the match with ease.
The Bronze medal went to Italy's 30-year old finalist Diana Bacosi, winner of a World Cup Stage Silver medal in Acapulco, this year. Bacosi outdid Thailand's 27-year old Jiewchaloemmit in the Bronze medal match 15 to 13 hits, securing her first World Cup Final medal ever.
The second Russian finalist, Albina Shakirova, 26, placed in fifth with 14 hits in the Semi-Final, followed by Slovakia's 28-year old Olympic Bronze medallist Danka Bartekova, sixth with 13 hits.
“It feels great to win this title. It has been one of my best seasons ever!” The 2008 Olympic Bronze medallist Wenzel said after the competition.
“I had won a World Cup title also in 2009, but now it feels different. I had a baby in the meantime, and now my life is a bit different. I am struggling to organize my time to train and compete. But I have a great family supporting me, and I made it!” The German shooter said.
“Shooting is my job, and this medal rewards all the efforts I made. I will take some time off, now, before the next season.”Christine added.
“I will be preparing at my best for 2014. Then, the first Olympic Quota places for the next Games will be assigned, and my goal is definitely Rio 2016.” Wenzel concluded. After winning the World Championship, two World Cup titles and four European Championships, the Olympic Gold is really the only medal missing from her trophy showcase. 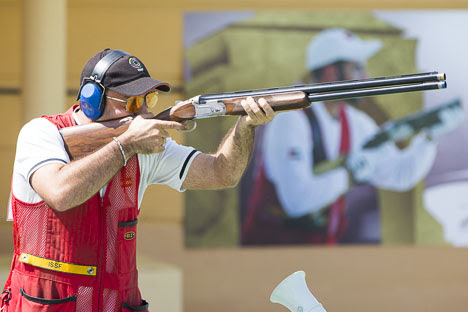 The Spanish shooter beat the two-time Wolrd Cup Final winner Tore Brovold (NOR) in the Gold medal match, winning his first world cup title ever just a few days after his wedding.
Juan Jose Aramburu secured the Skeet Men World Cup title at the 2013 ISSF Shotgun World Cup Final in Abu Dhabi, UAE.
The 32-year old shooter from Guipzucoa (ESP) just got married, and did not have time to train before the competition. Nevertheless, he shot consistently throughout the qualification matches, making it to the semi-final with 121 hits. Then, he shot a perfect match, hitting 16 out of 16 targets, accessing the Gold medal match.
There, 2011 World Champion Aramburu met the 2008 Olympic Silver medallist Tore Brovold of Norway, beating him 15 to 14 hits to secure the 2013 ISSF World Cup title.
“I did not expect to achieve a medal, here in Abu Dhabi.” Aramburu said.
“I did not have time to train for finals, before coming here. I just got married, and next to that I've just received a new shotgun from Beretta. I have been training only on normal rounds to get used to it. So I was not prepared to shoot a medal match.”
Once he made it to the Gold medal match, Aramburu knew he had to give his best: “I was so happy of my semi-final full score, that I got into the medal match extremely motivated.”
“When Brovold missed, I finally understood I could make it. I lost one target, but a 15 was enough to win today's match! ”
Aramburu is flying back with the Crystal cup, the trophy of the ISSF World Cup Series, the latest “present” for his wedding.
“I will finally take some time off now. I want to dedicate this medal to my family. I will spend some time at home, now. There's still time to get ready for the 2014 season.”
The winner of this year's ISSF World Cup Stage in Nicosia, Kuwait's Abdullaj Alrashidi, 50, pocketed the Bronze medal outdoing Denmark's reigning Wolrd Champion Jesper Hansen 15 to 14 hits. Alrashidi had previously equalled the world record of 124 hits out of 125 targtes during the qualifications.
Sweden's 26-year old Henrik Jannson placed in fifth with 15 +7 hits in the semi-final after loosing a shoot-off to access the medal matches. He was followed by UAE's Saeed Almaktoum, 37, the 2011 World Cup Final winner, who placed in sixth with 15 + 1 hits
Marco Dalla Dea