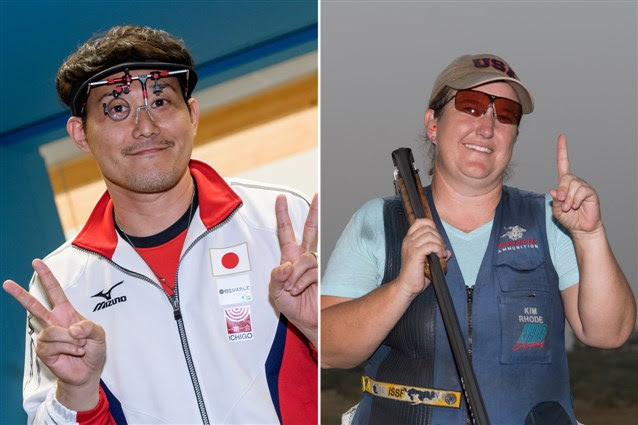 It’s the second award for the 42-year-old Japanese shooter, who already claimed it once in 2010. For the American six-time Olympic medalist, instead, it’s the first Shooter of the Year trophy.

Kimberly Rhode of the United States of America and Matsuda Tomoyuki of Japan have been named the 2017 female and male Shooter of the Year, definitely sealing the 2017 season of shooting sport.

42-year-old Matsuda Tomoyuki also took the spotlight in the Indian capital city, climbing on the highest step of the podium at the ISSF World Cup Stage 1 and also pocketing the first ISSF World Cup Final title of his career a few months later, setting a new World Record on both occasions: first scoring 240.1 points, then nailing 241.8.

Here’s the top-10 athletes of the male ranking:

And the top-10 shooters of the female ranking:

“It feels amazing! It’s been actually an incredible year for me, I worked so hard leading up to it, and it’s great to see it all come together. This is just an incredible honour, I’m super excited!” said Rhode.

“My goal now is to keep competing at the same level as I did in 2017…” she concluded. “At the end of the day, making the points and getting the quota are the main goals this year.”

“I feel honored,” commented the Japanese athlete. “To win this prize is an honour, and I will keep the memory of it as one of the most valuable moments in my career as a shooter and in my life.”

“The top event this year will be the ISSF World Championship in Changwon,” Matusda added. “I trained a lot for it, and to win there is my main goal this season.”

The award was assigned by the International Shooting Sport Federation according to the vote of the ISSF Coaches Advisory Committee, the ISSF Athletes Committee and a selected panel of media representatives.

Matsuda and Rhode — who respectively follow Italy’s Niccolò Campriani and Greece’s Anna Korakaki in the list of winners — will be honored with the trophy during the 2018 ISSF Season, kicking-off in a few weeks in Guadalajara (MEX), where the first stage of the 2018 ISSF World Cup Series will take place from March 1st to March 12th. Aaron Heading was one of England´s medallists at Glasgow 2014 but
there will be no shooting stars at Birmingham 2022 (Gareth Fuller, PA)

Commonwealth Games Federation boss David Grevemberg has taken the unusual step of writing an open letter to explain why shooting has not been included in Birmingham’s plan for the 2022 event.

Each host city must include the CGF’s 10 core sports in its programme but then has considerable freedom to pick at least seven sports from an optional list. These choices tend to be based on the venues available and the host nation’s medal prospects.

Birmingham, which was finally confirmed as the 2022 host in December, has announced it will be staging basketball, judo, gymnastics, table tennis and wrestling from the optional list. It is expected to add archery, track cycling and women’s T20 cricket.

But there is no place for shooting in Birmingham’s plan, which means the sport misses out for the first time since 1970. The move has provoked complaints from shooting powers such as Australia and India, the International Shooting Sport Federation (ISSF) and even the Countryside Alliance, which described the decision as a “deeply disappointing shock” and “shortsighted”.

Chief executive Grevemberg has responded by reiterating the CGF’s rules on which sports are compulsory and which ones are not, explaining that these lists were made by the organization’s general assembly in 2015 and then approved by the membership in 2016.

In his letter, the former Glasgow 2014 boss goes on to praise shooting as “a thrilling sport with a proud and longstanding heritage at the Commonwealth Games” and says he understands why some countries will be particularly disappointed.

But Grevemberg then underlines why it is so important for each host city to propose a programme “that complies with our agreed rules but also works best for them”.

He explains: “Our shared ambition is to broaden the pipeline of Commonwealth cities and nations wishing to realize the benefits of a Games – and to do that we must give our hosts the scope to propose and deliver their Games.”

This is a reference to the fact Birmingham was a late substitute for Durban after the South African city ran into financial problems and was stripped of the Games early last year. The CGF desperately tried to bring other cities into the race but was ultimately left with a choice of one: the winner of a two-city English beauty contest between Birmingham and Liverpool.

Grevemberg added: “We continue to build on our strategic partnerships with all sports across the Commonwealth sports movement and the CGF president will shortly meet the ISSF to discuss their future plans and ambitions to continue the development of shooting disciplines throughout the Commonwealth.” 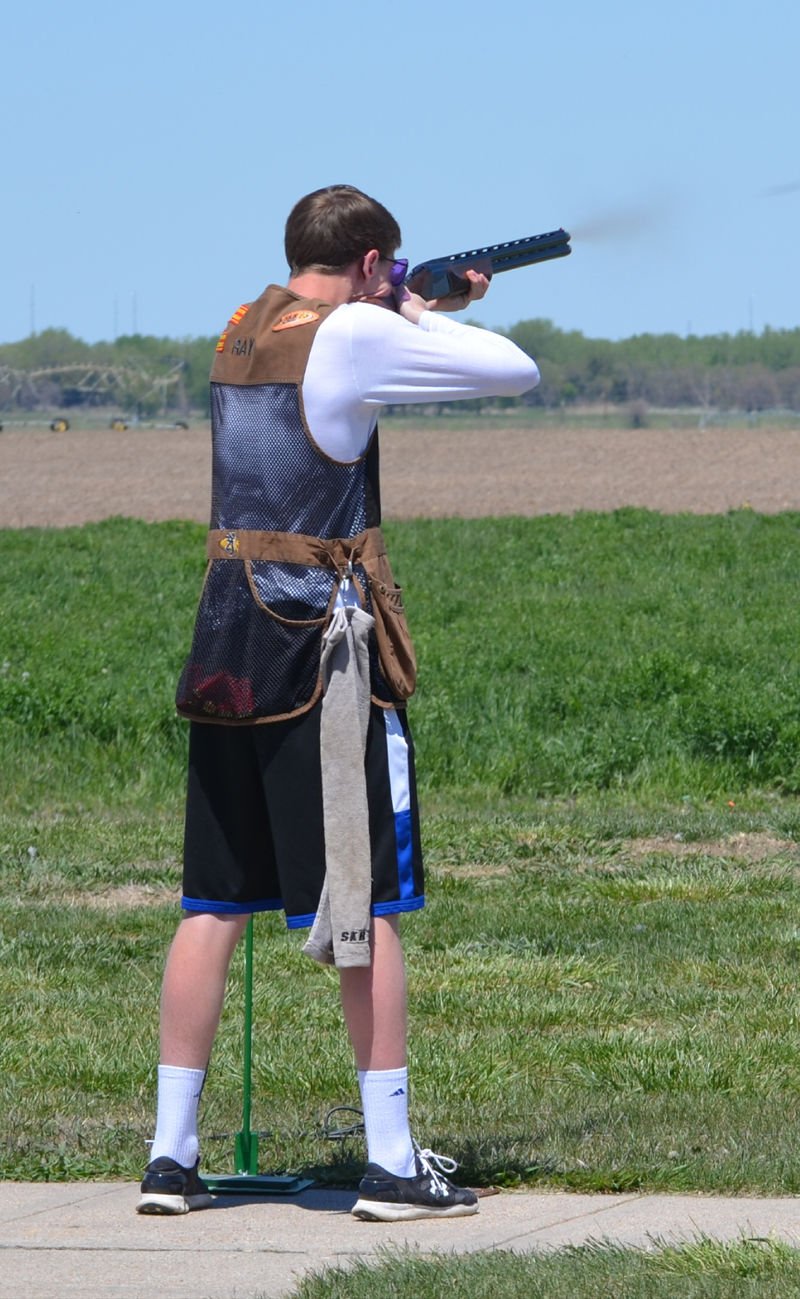 STATE SHOOT: Christian Ray competes at the Cornhusker State
Junior/Senior High School Shoot last May, where he was on the
Ashland 4-H team that earned a first place high overall.

Illustrious Veterans os the Spanish Olympic Shooting. To the shooters
like them all over the world dedicate our 1rst International ALCOOR
Trophy for Veterans next3rd and 4th of March in Madrid.
.
Antonio Hernandez y Diego Tomas Krichevskiy

2018 shooting Para sport Worlds: What you need to know

Shooters are gearing up for May’s Championships in South Korea


This year is not only a World Championships year for hundreds of shooters, but also the beginning of the qualification process toward the Tokyo 2020 Paralympic Games.
The 2018 World Shooting Para-Sport Championships will take place from 1-12 May in Cheongju, South Korea. It will be the first event where athletes can secure quota places for their countries at Tokyo 2020.
Around 300 shooters from 60 countries are expected to compete.
The 2002 World Championships were held in Seoul, South Korea, and attracted 211 athletes from 36 countries. The last Worlds took place in Suhl, Germany, in 2014. Nearly 250 athletes from 50 countries competed for titles, with South Korea topping the medals table with 10 gold, three silver, and four bronze medals.
Here is a quick look at what is to come for shooters in their World Championships year:
Important events before Cheongju 2018…
Athletes still have two more major events where they can show off their form before Cheongju.
The World Cup in Al Ain, United Arab Emirates, will take place from 19-28 March; and the Grand Prix in Szczecin, Poland, will follow from 11-14 April.
The Szczecin 2018 Grand Prix will be the last chance to earn 10m Minimum Qualifying Scores (MSQ) ahead of Cheongju 2018.
Last time out…
The last World Shooting Para-Sport competition of 2017 in Bangkok, Thailand, saw United Arab Emirates’ Abdulla Sultan Alaryani finishing with a good feeling. The Rio 2016 Paralympic silver medallist shot two world records, one in the R6 (mixed 50m rifle prone SH1) and another in the R7 (men’s 50m rifle 3 positions SH1).
South Korea could expect to cheer on Jinho Park, who also was on target in Bangkok. The reigning R3 (mixed 10m air rifle prone SH1) world champion captured gold in the event in Bangkok, followed by another win in the R1 (men’s 10m air rifle standing SH1) in world-record fashion.
Last year also saw Slovakia’s Veronika Vadovicova maintain her form from Rio 2016, where she won the R2 (women’s 10m air rifle standing SH1) and R3 (mixed 10m air rifle prone SH1). Her most recent competition was the World Cup in Osijek, Croatia, where she left with two individual medals, including a win in the R2.
Vadovicova’s R2 rival Cuiping Zhang did not compete in 2017, but the Chinese shooter is expected to find success in Cheongju after finishing runner-up to her Slovakian counterpart at Rio 2016.
More information will be made available on the event website.