The competition took place at the 1972 Olympic Shooting Range of Munich from the 24th to the 29th of May, and saw the participation of 700+ athletes, 400+ officials, for a total number of 1200+ start in the ten Olympic events of Rifle and Pistol Shooting.

The People's Republic of China finished atop of the overall medal standings of the event, with two Gold and five Silver medals. Serbia placed in second, with two Gold and one Silver, thanks to the last-minute victory of Nemanja Mirosavljev at the 50m Rifle 3 Positions Men final, the last match of the event. Austria also finished on the podium with one Gold and one Silver medals.


In the last two weeks, my wife and I we were in Switzerland, knowing a little more of its beautiful nature. During this period we were invited by Felix Grendelmeier, for a delicious lunch at his home along with his charming wife and children. During lunch he told about the great shooting championship held annually in Switzerland and invited us to watch the biggest Shooting Championship in the World that would take place in the next weekend.

I was very interested, but we had our return to Brazil was already scheduled for the 28th and we could not watch this shooting  mega event.

But, occurred to me the idea to ask Felix to write an article describing all about this event, how many participants and what kind and shooting modalities are disputed. Therefore follows Felix's article about this mega event, see the article written by Felix Grendelmeier

Felix Grendelmeier
This weekend the biggest marksmanship competition in the world wil take place in switzerland - like every year! Every year countless towns and villages across Switzerland host the "Feldschiessen" (field shoot). It offers the ideal opportunity for recreational shooting enthusiasts, both young and old, experienced or first-timers, to meet up and indulge their shared passion. Over the course of one weekend, they compete in either the 300-metre rifle shoot or the 50- and 25-metre pistol shoot. Regardless of the distance, each competitor fires a total of 18 shots, whether one after the other or in rapid series.
Over 130,000 took part in the 2012 "Feldschiessen", making it the largest sporting event in Switzerland, and the largest marksmanship competition in the world. Dating back to the second half of the 19th century, the roots of the "Feldschiessen" tradition are firmly planted in Swiss military history, which evolved in tangent with the expansion of the Swiss Army and federal training exercises. Over time, it would become a purely recreational pursuit, enabling the older generations of marksmen to pass on their expertise in handling firearms for peaceful purposes. In 1996, serving soldiers in the Swiss Army were no longer subject to mandatory membership of a shooting club. Since then, the Swiss Shooting Sports Federation has seen a dramatic decline in membership numbers.

From 1936 distinction medals (kranz) were handed out for a certain level achived depending on age and weapon. Today, about 60% of the shooters shoot a "Kranz" result.

ISSF Target Sprint, the New Sport for the Shooting Sport The new ISSF Sports for All event was officially conducted for the first time in Munich, during the 2013 ISSF World Cup Stage held at the 1972 Olympic Shooting Range of Munich.
The first ISSF TARGET SPRINT competition took place at the 1972 Olympic Shooting Range of Munich, yesterday, during the 2013 ISSF World Cup Stage in Munich.
Over 90 athletes participated in the debut competition of the new ISSF Sport For All event.
ISSF TARGET SPRINT combines athletes’ precision shooting and running abilities. The new event mixes air rifle shooting and middle distance running. It requires participants to be fast, accurate shooters and to possess outstanding physical fitness.

How does ISSF TARGET SPRINT work?
ISSF Target Sprint participants begin each event with a mass start and a fixed distance run. At the end of the first run, 400 meters, they stop at a 10-meter air rifle range where they must pick up their rifles and shoot at and hit five knockdown targets from standing position. More than five shots are often required to hit all five targets, but that adds to the shooting time. There are no penalties, but the sooner you finish shooting, the sooner you can start running your next lap.
At the end of the second run, participants must shoot another five targets before beginning the third and final running stage.
The athlete who completes the three running stages and two shooting stages and who is the first at the finish line is the winner.

Four events were conducted here in Munich.
Tomas Bystrieky of Czech Republic won the ISSF TARGET SPRINT Men event, with an overall time of 06:25.4 minutes, with a 24.5 seconds margin on his followers. Securing the Silver medal, it was Germany's Hans Wurmer, with 6:49.9 minutes. Another German shooter, Alexander Goerzen, pocketed the Bronze medal with a time of 7:11.7 minutes, finishing 46.3 seconds behind the winner.
Judith Wagner of Germany won the ISSF TARGET SPRINT Men event, crossing the finish line in 8:01.5 minutes. Ivana Kruijjff (GER), followed her shortly behind bagging Silver with time of 8:13.6 minutes. Bronze went to Germany's Simone Sternthal, with a final time of 8:59.8 minutes.

Among the Junior Women athletes, Jana Landwehr stepped atop of the podium winning Gold with a final time of 7:50.7 minutes, followed only 4.2 seconds behind by Lisa Kellermann with an overall time of 7:54.8 minutes. Anna Wahls finished on the third step of the podium, pocketing the Bronze at 8:01.8 minutes.

“A Sport for All event” ISSF President said.
ISSF President Olegario Vazquez Raña said “We are developing ISSF TARGET SPRINT under the rubric of Sport for All, which is a program now being strongly promoted by the IOC. We were looking for a new event that combines marksmanship and fitness, can be staged outdoors, and is accessible to everybody.”
“A pair of running shoes is all you need. Everything is designed to keep costs down for the athletes. The ISSF will provide targets and single-shot air rifles,” ISSF Secretary General Franz Schreiber said.
Marco Dalla Dea
Postado por tiro esportivo, jm esporte mjndial às 14:22 Nenhum comentário:

A story for a shooter to remember 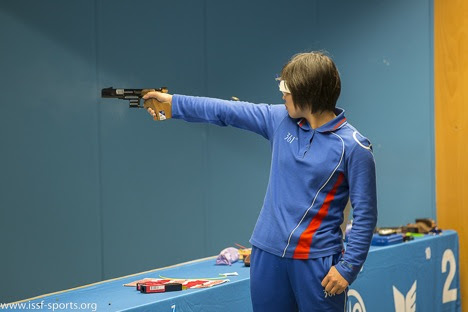 SPOTLIGHT ON YOUTH - NOT THE GOLD, BUT THE STORY

Jo Un Mi - today's 25m Pistol Women youngest finalist - didn't stand out for any medal, but for a historical duel.
This afternoon was not an easy time for Jo Un Mi - the 19-year-old shooter taking part in the 25m Pistol Women event at the ISSF Rifle and Pistol World Cup, now being contested in Munich, Germany. The North Korean athlete didn't make it to the podium, whose highest step was taken by China's Yuan Jing (after a completely Chinese Gold medal match). Even withouth reaching any medal, Jo – the youngest finalist (together with Poland's Tomala) - emerged anyway, winningan incredible shoot-off against Georgia's Salukvadze.
The North Korean shooter found herself in a 4th place tie with Nino Salukvadze - Georgia's 1988 Olympic Champion - right before the elimination, at the end of the semifinal. Therefore, a tie-breaker was needed to find out who was going to run for the Bronze medal.
Jo – being a novice – didn't immediately understand the situation, so she did not shoot at all. On the other hand,Salukvadze didn't take advantage of her opponent's mistake, incredibly not hitting any target out of five.
The tie was not broken and another shoot-off was needed: Jo was now told se had to shoot, but she incurred into anallowed malfunction, which didn't permit her to shoot - once again. A few stands away from her, Salukvadze missed the whole series - one more time.
When it came to repeat the series - due to the malfunction - Jo only hit 1 target, and that was it: no more shots to go forSalukvadze. The 19-year-old shooter Jo – at her debut in an ISSF Final round - outdid her (way more experienced) opposing competitor Salukvadze (48-time World Cup Stage finals in her career), after an unbelievable series of shots.
Jo is not coming back home with a Gold medal, but – definitely - with a great story to tell!

In shooting sport, there is always interesting stories about athletes and how they learn from situations especially when they are young and without experiences. Those experiences will always be the best resource for the athletes to grow up in the sport and become a great winner in the future