The flame for the next Youth Olympic Games was lit today in Athens, Greece. It will “travel”online via an interactive app, before physically arriving to the location of the Games.
Less than 4 months away from the start of the competition, the flame was lit today in Athens, Greece, for the nextSummer Youth Olympic Games – which will take place in Nanjing, China, from 16 to 28 August 2014.
The traditional ceremony at the Panathenaic Stadium gave way to the Virtual Torch Relay, a digital tour which will allow to engage with the Youth Olympics using an interactive app (downloadable here), offering insights on the Olympic values and other activities. The physical torch will make it to the location of the Games in August.
The Youth Olympics will feature 6 shooting events, adding up to 80 participation quotas (more about this here).
You can watch the Nanjing 2014 flame lighting ceremony on the website of the Olympic Movement.
Alessandro Ceschi 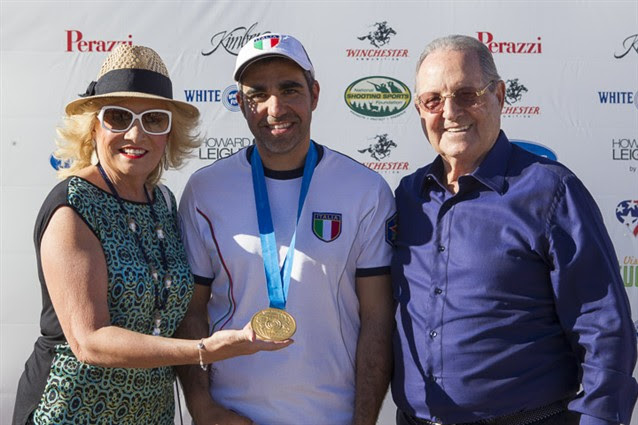 2014 ISSF SHOTGUN WORLD CUP IN TUCSON CLOSED TODAY: MEDALS AND RECORDS
USA finished atop of the medal standings of the first Shotgun world cup event of the year, followed by Australia. The Skeet Men World Record was equalled. Next stop: Almaty, Kazakhstan.
Today's Skeet Men final won by Italy's Luigi Lodde concluded the second leg of the 2014 ISSF World Cup Series, conducted in Tucson, Arizona, USA, following the first leg (in Rifle and Pistol event) held in Fort Benning, GA, USA, two weeks ago.
Over 300 athletes coming from 45 countries competed in the Shotgun shooting event.
The host country, USA, finished atop of the medal standings, with a total of four medals (1 Gold, 1 Silver and 2 Bronze medals). Australia followed in second place with three medals (1 Gold, 1 Silver, 1 Bronze), while India, Italy and Slovakia tied in third place with one Gold medal each.
Italy's Luigi Lodde and USA's David Dustin Perry equalled the current Skeet Men World Record of 124 hits, today.
The ISSF World Cup Series will now continue in Almaty, Kazakhstan, where the next ISSF World Cup Stage will be held from the 16 through the 25 of May.
Follow the next events on www.issf-sports.org
The medal standings: 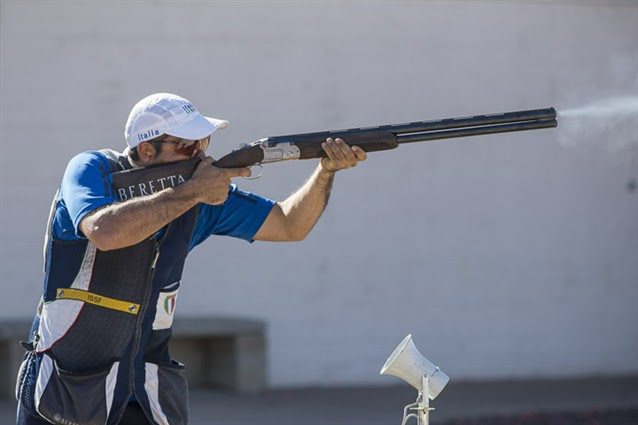 A RECORD AND TWO SHOOT-OFFS: LODDE'S WAY
TO THE SKEET PODIUM

The Italian shooter equalled the current world record of 124 hits, then shoot-off to
get into the Gold medal match, and shoot-off again to get out of it. Sweden's Nilsson
finished in second, Bronze to USA's David Dustin Perry who also equalled the world
record at the end of the qualifications
Italy's Luigi Lodde won the last Gold medal match of the 2014 ISSF Shotgun
World Cup in Tucson, Arizona, USA, beating Stefan Nilsson of Sweden in a
shoot-off at the Skeet Men Final, today.
Lodde, ranked 13th in the world, had to fight hard, to win his very first world
cup gold medal.

The 34-year old athlete qualified for the semi-final with a record score of
124 hits (equalled world record), making it to the semi-final in the lead.
But with the new competition format that has been introduced last year,
the qualification score is not carried on: each phase of the competition
starts form zero. An uphill road, that Lodde had to climb up.

He cleared the semi-final with 15 hits out of 16 targets, and won a four-way
shoot-off to access the Gold medal match. There he met Sweden's Nilsson,
23, but 16 targets were not enough to decide the medals. At the end of the
match, the two athletes being tied with a score 15 hits, another shoot-off had
to be conducted. Lodde won again, beating Nilsson 10 to 9 his, finally reaching
the top of the podium.

“Difficulties make me stronger. I found the right motivation going into the shoot-offs.
I zeroed in, and I made it.” The Italian shooter commented.

“It has been an hard competition: starting from the qualifications right up to the
medal match I had to fight for every single target.”

The Bronze medal went to USA's first-time finalist David Dustin Perry, 21,
who also equalled the current world record of 124 hits out of 125 targets in
the qualifications, and then beat Australia's Paul Adams by 15 to 13 hits in
the Bronze medal match.

The 2008 Olympic Silver medallist Tore Brovold of Norway closed the match
in fifth place, with 15 hits in the semi-final, followed by the current world rank
leader Jesper Hansen of Denmark, sixth with 13 hits.

“Last year the Skeet rules changed, and it took time to adapt to the new
competition format.” Today's winner Lodde commented. “But, as you could
see today, top shooters have been training for it over the winter time.
The level is already quite high, and this is only the first World Cup of the year.
We will definitely see more high scores and shoot-offs in the future.
On the way to Rio 2016, the game is getting hard.”