The competition will run from the 6 through the 20 of September 2014. All the
World Championship events will take place at the CEAR Shooting Range
but the 10m Running Target events, that will be held at a separate venue in
the city of Las Gabias. 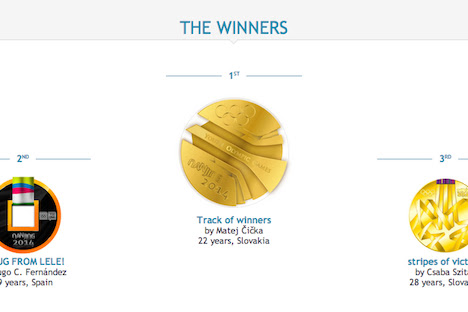 23-year-old Matej Čička's concept ("Track of Winners") will feature on the medals to be awarded in Nanjing, China in August 2014, at the second edition of the Summer Youth Olympic Games.
A young student and sports fan from Slovakia just won the Nanjing 2014 Youth Olympic Games Medal Design Competition, the International Olympic Committee (IOC) announced today.
An IOC jury chose Matej Čička's concept ("Track of Winners") from a pool of over 300 entries from 50 plus countries, describing it as "modern, fresh and dynamic".
"It was our school task to join this competition and design a medal," the 23-year-old of Slovakia said. "I was inspired by the athletes’ track which, to me, means the base of the Youth Olympic Games".
Thomas Heatherwick (the English designer behind the Olympic cauldron at London 2012) was in the judging panel, which also included Youth Olympic Games Ambassador Yelena Isinbaeva and other sports personalities.
Second and third place were respectively taken by 29-year-old of Spain Hugo Fernández ("A Hug From Lele!" was the name of his design) and Csaba Szitas, 28, from Slovakia ("Stripes of Victory").
The competition had started in September, giving creative people worldwide the chance to design the Youth Olympic Games medals, to be awarded in Nanjing, China from 16 to 28 August 2014, when the event (featuring a a 6-event Shooting program) will take place.
Matej Čička's first prize also includes a trip to the Games, tickets to the Opening Ceremony and a full collection of the medals featuring their design.
An accurate analysis of the winning concepts, as well as a gallery of the other designs who took part in the contest, can be found at the official website of the competition.
Alessandro Ceschi

I now present the changes that were introduced in rifle events rules
As in previous presentations, the changes can be easily identified because they are written in green letters.

In the rules for General Standard for Clothing Rifle (rule 7.5.1), due to the various changes introduced and the elimination of other rules which caused a major change in the numbering of the sub-items, to make it more understandable, I decided to put in these presentation the whole rule. The rules of the first edition that were deleted are: 7.5.1.2, 7.5.1.4, 7.5.1.5 and 7.5.1.6.

7.4.5.3 (new)    Pistol Grips
No part of the pistol grip may be extended or constructed in any way that would allow it to touch or support the back of the hand.

7.5                   CLOTHING REGULATIONS
See the General Technical Rules for general standards regarding clothing and the testing of clothing (Rule 6.7).

7.5.1                General Standards for Rifle Clothing
7.5.1.1             All shooting jackets, shooting trousers and shooting gloves must be made of flexible material that does not materially change its physical characteristics, that is, become stiffer, thicker or harder, under commonly accepted shooting conditions. All lining, padding and reinforcements must meet the same specifications. Any lining or padding must not be quilted, cross-stitched, glued or otherwise affixed to the outer clothing layer other than at normal tailoring points. All lining or padding must be measured as a part of the clothing.
7.5.1.2             Only one (1) shooting jacket and only one (1) pair of shooting trousers may be used by each athlete in all Rifle events in any ISSF Championship. All rifle shooting jackets and shooting trousers must have a seal with a unique serial number issued by ISSF Equipment Control and registered in an ISSF database. Athletes with jackets or trousers that do not have a seal must bring them to Equipment Control to have a seal attached and registered in the ISSF database. Only one jacket and one trouser may be registered to each athlete. Athletes with more than one jacket or trousers with ISSF seals must inform the ISSF Equipment Control which item will be used in future competitions and only one seal per item will remain. Athletes that change jackets or trousers or any with no seal (new or changed) must bring them to Equipment Control to obtain a seal and retire the previous seal (6.7.7.1.f). When an athlete is selected for post-competition testing, the test must confirm that the seal number registered to that athlete was the seal number on the clothing used by that athlete.

7.5.1.3             Ordinary athletic type training trousers or normal athletic type training shoes may be worn in any event or position. If shorts are           worn during competitions, the bottom of the leg must be no more than 15 cm above the center of the kneecap. Sandals of any type may not be worn.
7.5.1.4             Athletes are responsible for ensuring that all items of clothing used by them comply with these Rules. The Equipment Control Section must be open to make voluntary inspections of athletes’ clothing from the Official Training day until the last day of Rifle competition and athletes are encouraged to bring their rifle clothing items for an Equipment Control check before the competitions to be sure they comply with these Rules. In preparing jackets and trousers for competitions, athletes must make allowances for any measurement variations that may occur because of changes in temperature, humidity or other environment conditions.

7.5.1.5             Post-competition checks will be made of all Rifle clothing items after Elimination and Qualification Round competitions to ensure compliance (6.7.6). 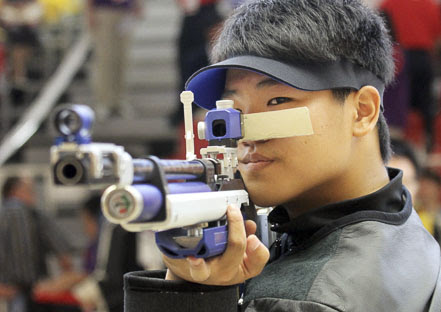 “ISSF Junior Cups are a vital part of a major new ISSF initiative to more actively promote junior shooting on a worldwide basis,” President Vázquez Raña said.  “Encouraging more youth in more countries to participate in our sport by giving them more opportunities to compete in high standard international competitions is a key to our future.”

Secretary General Schreiber reported, “the ISSF ultimately expects to sanction and supervise Junior Cups on each continent every year.  Junior Cup programs will include the 15 Olympic events plus the Youth Olympic Games Mixed Team events.  Programs may also include team events, other ISSF-recognized events or ISSF-recognized Sport for All events such as Target Sprint or Five-Shot Air Pistol.  Junior Cup competitions will be MQS competitions if conducted in the qualification timeline of the Youth Olympic Games or Olympic Games.  They are open to all junior competitors who are age 20 or younger during the competition year.”

“We are pleased to announce that the first ISSF Junior Cup will be organized in Suhl, Germany on 26 May to 1 June 2014,” the Secretary General continued. “Suhl’s annual Junior International Shooting Competition (IWK) is already a well-established junior competition that has been held for many years; in 2013 this competition hosted 550 junior athletes from 40 nations. The Suhl Shooting Center is a great venue with many spectators and media support and it will be newly equipped with electronic targets in 2014. The ISSF looks forward to cooperating with the German Shooting Federation to launch the new ISSF Junior Cup series there.”

The ISSF plans to expand the Junior Cup series by selecting additional organizers for 2015. ISSF Member Federations interested in hosting Junior Cups in 2015 or future years are encouraged to apply to ISSF Headquarters. The ISSF is seeking organizers with venues that have at least 60 10m, 60 50m and 40 25m rifle-pistol firing points, with electronic targets. Junior Cup shotgun bids should have at least three ranges.  “The ISSF wants Junior Cups to fulfill standards similar to those established for World Cups to guarantee the best possible competitions for junior athletes,” President Vazquez added.

The ISSF will appoint a Technical Delegate for each Junior Cup. Vice President Gary Anderson will be the Technical Delegate for first Junior Cup in Suhl.  He commented, “Junior Cups are indeed very important for the future of our sport.  These additional international junior competition opportunities will inspire even more youths to become active in shooting.”

“We hope these new youth development initiatives and especially the first 2014 ISSF Junior Cup in Suhl will have the full support of our member federations. We are confident that a stronger ISSF junior program will bring all of us a stronger ISSF,” ISSF President Vázquez Raña concluded.

These is the second part of the fine tuning changes of the rules. Just to remember, all changes are writen in green letters.

b) The Equipment Control Section must be open to provide voluntary inspections for athletes’ equipment, starting with the Official Training day and continuing through the last day of Rifle-Pistol-Running Target competition;
33
1
2
c) ISSF calibration test equipment must be used to check testing instruments before each day of testing and when a disqualification is considered during post-competition testing;

d) Athletes are encouraged to bring any items of equipment to the Equipment Control Section for checking if they are not certain if they will pass a post-competition check.

e) The Equipment Control Section must ensure that all Rifle shooting jackets and shooting trousers are identified with a seal bearing a unique serial number that is registered to the athlete. The seal must be designed so that it cannot be removed without breaking the seal. Seals previously issued for one-time-only clothing inspections (2013 and prior) fulfill this requirement. Jackets and trousers with no seal must be checked for compliance with ISSF Rules and have seals affixed to them that are registered for the athlete. The Equipment Control and Rifle Juries will use the jacket and trouser seals to conduct random checks for compliance with
Rule 7.5.1.2;

f) The Equipment Control Section must keep a register of, the guns, shooting jacket and trousers that they check, with the name of the athlete, the make (manufacturer), serial number and caliber of each gun checked on an Equipment Control Card;

6.7.9.4 (new)    Appeals against a post-competition test disqualification may be submitted to the Jury of Appeal. The Jury of Appeal must decide if the test was performed correctly, but it may not repeat the test.

Jumping rule 6.11.6 until I receive a clarification about the rule.

6.12.8 (new)    Physical Abuse of a Competition Official or Athlete
An athlete or team official who makes physical contact with a Jury Member, Referee, Range Officer, other competition official or another athlete by grasping, pushing, shoving, striking or similar means may be excluded from further participation in a Championship. Any such act of physical abuse must be reported to the Chairman of the Jury responsible for supervising that area of activity. One or more witnesses or physical evidence must confirm the act of alleged abuse. The Jury must then decide whether the athlete or team official may be excluded from that Championship. A decision to exclude may be appealed to the Jury of Appeal (6.16.7). If the Jury or Jury of Appeal concludes that the act of abuse was of such a serious nature that further sanctions are warranted, they may, in addition to excluding the athlete or team official from the current championship also refer the case to the ISSF Ethics Committee (3.12.3.5, Annex “CE”) for further
Consideration

6.17.1.12         Finals Rules and Procedures.
e) In Finals, dry firing is permitted only during a Preparation and Sighting Time, Changeover and Sighting Times or  a Preparation Period, except that dry firing during 25m Rapid Fire Pistol Finals is permitted in accordance with 6.17.4. Dry firing at any other time must be penalized with a one (1) point deduction in 10m and 50m Finals and a one (1) hit deduction in 25m Pistol Finals.

No changes were made in these two Finals Rules