“It is vital that all athletes take the necessary time to consult the List."


The World Anti-Doping Agency (WADA) has published the 2017 List of Prohibited Substances and Methods; along with the 2017 Summary of Major Modifications and Explanatory Notes. The List – which designates what substances and methods are prohibited both in- and out-of-competition, and which substances are banned in particular sports – was approved by the Executive Committee on 21 September and will come into force on 1 January 2017.
“WADA is pleased to publish the 2017 Prohibited List, which is one of five International Standards that are mandatory for all signatories of the World Anti-Doping Code [Code] to follow,” said WADA President, Sir Craig Reedie. “All athletes around the world are held to these standards and there can be no tolerance for people who intentionally break the rules,” Reedie continued. “Updated annually, the List is released three months ahead of taking effect so that all stakeholders – in particular athletes and their entourage – have ample time to familiarise themselves with the List and its modifications,” he said.
Said Director General, Olivier Niggli: “The Prohibited List follows a very extensive stakeholder review process over the course of nine months. In reviewing the List, experts examine such sources as: scientific and medical research; trends; and, intelligence gathered from law enforcement and pharmaceutical companies in order to stay ahead of those that wish to cheat.”
Niggli continued. “It is vital that all athletes take the necessary time to consult the List; and that, they contact their respective anti-doping organisations [ADOs] if they have any doubts as to the status of a substance or method,” said Niggli.
The List’s annual revision process is led by WADA, beginning with an initial meeting in January and concluding with the publication of the List by 1 October. This is an extensive nine-month consultation process which includes gathering information, circulating a draft list, stakeholder submissions, committee recommendations and the approval of the List by WADA’s Executive Committee during its September meeting.
It should be noted that, for athletes who have a legitimate medical reason for using a prohibited substance or method that is on the List, they can be accommodated via the International Standard for Therapeutic Use Exemptions (ISTUE), which has overwhelming acceptance from athletes, physicians and anti-doping stakeholders worldwide.
To view the changes made to the 2017 Prohibited List, please see the 2017 Summary of Major Modifications and Explanatory Notes.
Languages and formats
As of Friday (30 September), the 2017 Prohibited List, the Summary of Modifications, and the 2017 Monitoring Programme are available for download on WADA’s website in English. The French and Spanish will follow shortly.
Stakeholders wishing to translate the List into other languages are kindly asked to signal their interest atinfo@wada-ama.org, by 23 October.
As has been the case in past years, the List will be made available as an app and on other mobile devices effective 1 January 2017. A total of 99 athletes from 34 countries is expected to participate, piling up 113 starts. The competition will deliver the 10 seasonal titles of the Rifle and Pistol disciplines, starting on October 6th.

Here is the schedule of the ten finals:

The best athletes of the 2016 ISSF World Cup Series, who earned points along the four stages held in Bangkok (THA), Rio de Janeiro (BRA), Munich (GER) and Baku (AZE), qualified for the World Cup Final along with the Rio 2016 Olympic Games medallists and the 2015 ISSF World Cup Final title holders.

The ten final matches of the ISSF World Cup Final in Rifle/Pistol events will be live streamed on the ISSF’s website and on the Federation’s Livestream channel.

The second ISSF World Cup Final, the last competition of the 2016 season, will take place in Rome (ITA) from October 10th to October 16th.
Marco Vettoretti

Five things we learned from shooting at Rio 2016

From retiring athletes to the dominance of women on the world stage, many lessons emerged from the Paralympic Games.

By Jake Smith | For the IPC


As the dust settles on the Rio 2016 Paralympic Games and athletes and teams return home, there is time to reflect on what was a truly great event.
Many great stories and faces for the future emerged. Here are just a few highlights.
It is not over until it is over
The world witnessed two gold medals that were decided on the final roll of the dice. China’s Cuiping Zhang and Slovenia’s Veselka Pevec both showed incredible resilience to come from behind and win gold on the last shot of the final in their respective events.
In what was one of the most dramatic scenes at the Olympic Shooting Centre, Zhang fired a near-perfect 10.8 on her very last shot of R6 (mixed 50m rifle prone SH1) final to overthrow defending Paralympic champion Abdulla Sultan Alaryani of the United Arab Emirates.
In similar circumstances, Pevec faced off against countryman Gorazd Francek Tirsek in a gripping duel that went down to the wire for gold in R4 (mixed 10m air rifle standing SH2). Tirsek was head and shoulders above the rest of the field for the best part of the match, but Pevec’s fighting spirit continued to gather momentum as she closed the gap on her friendly rival. It came down to the very last shot of the competition for Pevec to topple Tirsek and realise her dream of becoming Paralympic champion.
You are not always as good as your last shot
Rio 2016 marked the tenth consecutive Paralympic Games for Swedish shooting legend Jonas Jacobsson, and although he did not take home a medal he will leave a long and lasting legacy as one of the greatest Paralympians of all-time. Jacobsson ends his professional shooting career with 30 Paralympic medals spanning across four decades. His collection boasts an astonishing 17 gold, nine silver and seven bronze medals.
Women are a force to be reckoned with
Following the London 2012 Paralympic Games, shooting Para sport was gifted an additional 10 quota places specifically for women. The reason was to encourage participating nations to invest in their female athletes and showcase their talents to the rest of the world. The results from Rio 2016 speak for themselves…
Out of the six mixed competitions on the shooting schedule, women landed on five of the podiums including four gold medal winners; Slovakia’s Veronika Vadovicova in R3 (mixed 10m air rifle prone SH1), Slovenia’s Veselka Pevec in R4, Zhang in R6, and Iran’s Sareh Javanmardidodmani in P4 (mixed 50m pistol SH1). Adding to the dominance was Germany’s Natascha Hiltrop with silver in R3 behind Vadovicova and the USA’s Mckenna Dahl who picked up bronze in R5 (mixed 10m air rifle prone SH2) to become the USA’s first ever female to win a shooting medal at a Paralympic Games.
It is time to say goodbye
Rio bid farewell to two veterans of the sport; Jonas Jacobsson and 74-year-old Libby Kosmala who both drew the curtain on incredible careers. Jacobsson and Kosmala reached the pinnacle of their sport on a number of occasions and will exit the Paralympic arena as the two most decorated athletes in the history of the sport. They make way for a new cream of the crop headlined by young guns, Dahl, Ukraine’s Oleksii Denysiuk, Hiltrop and Sweden’s Philip Jonsson. All four of these athletes are in their twenties and made finals appearances in Rio with the first three all winning medals. With their vibrant attitudes and confidence on the world stage these young athletes are paving the way for a generational transformation across the sport. We have been given a glimpse of what’s to come at Tokyo 2020.
Weakness is merely a perception
At ten years of age, Vasyl Kovalchuk was attacked by a bear in front of his friends at a zoo in Europe. As a result, Kovalchuk became an arm amputee and from that day forward his life would change forever.
“If there is such a situation in your life, you have to overcome it and learn to live with it,” said Kovalchuk.
A young, innocent, Ukrainian schoolboy would learn to turn his impairment into determination and transform his hardship into a heroic quality. At the Rio 2016 Paralympic Games, Kovalchuk became a back-to-back champion after successfully defending his R5 (mixed 10m air rifle SH2) title. What is even more incredible about this story is that his wife, Olga, picked up a silver medal in P2 (women’s 10m air pistol SH1) making it a family affair and a fairytale ending for the Ukrainian couple at Rio 2016.
Kovalchuk showed us that if we shift our perspective to appreciate our strengths, we can achieve greatness. 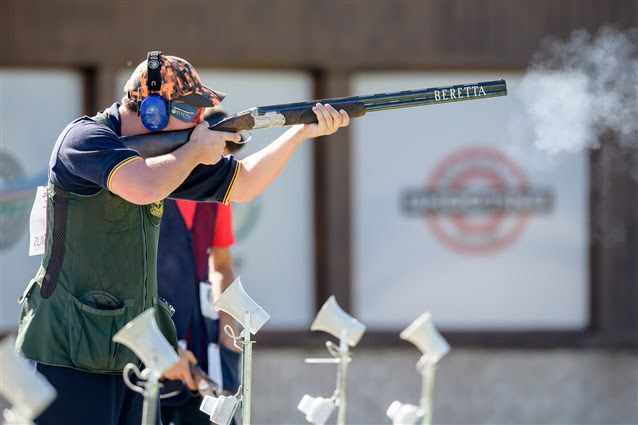 D’Ambrosio, who finished with the highest score at the end of the qualification round, also topped all of his rival in the semifinal, where he crushed 12 out of 15 targets. In the Gold medal match, however, he missed 3 clays in the second half of the match, while Wallace closed with a streak of 9 consecutive hits, claiming the Gold with a 14-hits to 12 win.

In the Bronze medal match, another Italian shooter earned his place on the podium: Matteo Marongiu, Silver medallist at the 2016 European Championship in Lonato (ITA), prevailed over India’s 17-year-old Manavaditya Singh Rathore with the final score of 14-hits to 11.

As Wallace, Marongiu, Rathore and 18-year-old Liu Chengjiang of the People’s Republic of China all finished the semifinal with 11 points, a four-way shoot off had to take place before the medal matches. There, Liu missed both of his clays, finishing 5th with 11 semifinal hits.

Australia’s Samuel John Bylsma finished the match in 6th position with 10 target hits in the semifinal.

Thanks to the two shooters they placed in the semifinal round, Italy also climbed atop the team podium, followed by Australia in 2nd positions and by India in 3rd positions.

Medal standings
The Russian Federation placed atop the final medal ranking with 12 Gold medals: 12 Golds, 9 Silvers and 4 Bronzes. India followed in 2nd place with 9 Golds, 5 Silvers and 10 Bronzes, for a total of 24 medals against Russia’s 25.

Despite a higher number of total medals, the People’s Republic of China placed 4th with 3 Golds, 4 Silvers and 1 Bronze, followed by the Czech Republic, Australia, Italy, Turkey and Kazakhstan who all pocketed at least one Gold medal.